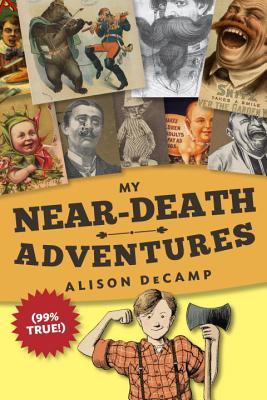 As a member of the Fearless Fiteeners, I was able to read an ARC of Alison DeCamp’s middle grade historical novel, My Near-Death Adventures (99% True) (2/24/2015; Crown Books for Young Readers). ARCs (Advanced Reader Copies) are the uncorrected proofs that are sent to reviewers, librarians, and book bloggers to promote the book. My fellow fifteeners and 2k15 classmates are sending their ARCs on tour, which allows us a sneak peek at these upcoming new releases. I’ve decided to let you all know about the ARCs I’m reading to help support my 2015 debut colleagues.

Here’s the description: It is 1895. Stan is on a mission to find his long-lost father in the logging camps of Michigan. And he’s embellishing all of it in his stupendous scrapbook.

There are many things that 11-year-old Stanley Slater would like to have in life, most of all, a father. But what if Stan’s missing dad isn’t “dearly departed” after all? Who better to find this absent hero/cowboy/outlaw than manly Stan himself? Unfortunately, Stan’s fending off his impossible cousin Geri, evil Granny, and Mama’s suitors like Cold-Blooded Killer Stinky Pete. If only he could join the River Drive, the most perilous adventure of all, where even a fellow’s peavey is at risk.

It’s a wild ride for Stan as he finds out about true manliness. But at least Stan has his scrapbook, full of 200 black-and-white 19th-century advertisements and photos, “augmented” with his commentary and doodles.

Stan’s tale will leave readers in stitches, but not the kind that require medical attention.

What I liked about it: I love Stan. How can you not? He’s funny, charming, and vulnerable all wrapped up in a super manly package. Just look at those muscles on the cover! Seriously, Alison DeCamp had me laughing from the start and throughout the novel. I stopped writing notes in the ARC because I would have filled the page with LOLs and smiley faces. Really. Reading DeCamp’s debut novel is like a master class in “voice” because she Stan’s is distinct and doesn’t waver at all throughout the novel. This is a sweet, fun story about a boy trying to become a man that will be loved by many. If you are a middle grade parent, teacher, or librarian, this one should definitely be on your shelf.

About the author (from her website): Alison grew up in the Upper Peninsula of Michigan where people say “Yah, eh?” and “Youse guys” and dress in many layers for seven months of the year. Unlike Stan, the hero in her book, Alison had indoor plumbing and more than two pairs of pants. However, she might have worn the same sweater every day in fifth grade.

The daughter of a hardware store owner (and reluctant, occasional employee) Alison spent too many school breaks attending ACE Hardware conventions and not enough at Disney World. After graduating from Michigan State University, Alison began teaching middle and high school English. Here she dealt with students chewing tobacco during one of her amazing lessons as well as a questionable principal who once pulled her out of class just to get Alison’s opinion on her new skirt.

After eight years, Alison quit teaching to stay at home with two babies who are now two teenagers. Babies and teenagers require almost the same amount of work. During this time she taught herself to make glass beads and jewelry which she sold at local galleries. She now can occasionally be found “working” at Between the Covers bookstore in Harbor Springs or grocery shopping. Her people like to eat.

The production of this book trailer was a family affair, which made it super fun. My sister, Saryna, let me use her home as our meeting place and production studio. She helped me to search for copyright-free photos and videos to match the novel. My niece, Alyna, is the first voice you’ll hear. She needed exactly two takes–what a pro! I can’t say the same for the rest of us. Attempts to narrate the rest of the video often ended with us laughing hysterically. We had so many takes that my daughter and younger nephew memorized it just from hearing us saying it over and over. And then there’s my genius nephew, Dean Jones, who probably should have been named Steve because he’s like the latest version of Steve Jobs & Steven Spielberg; plus, he’s a great DJ! He put the whole thing together on some fancy computer software. So, THANK YOU!!!! to my awesome family for helping me through this process. Here is the latest result: the official book trailer for my debut novel. For the best viewing, click on the settings icon and change it to 1080 HD. Enjoy and please share it with the readers in your life! Thanks!

As a member of the Fearless Fiteeners, I was able to read an ARC of Jen Brooks’ young adult movel, In a World Just Right (4/28/2015; Simon & Schuster Books for Young Readers). ARCs (Advanced Reader Copies) are the uncorrected proofs that are sent to reviewers, librarians, and book bloggers to promote the book. My fellow fifteeners and 2k15 classmates are sending their ARCs on tour, which allows us a sneak peek at these upcoming new releases. I’ve decided to let you all know about the ARCs I’m reading to help support my 2015 debut colleagues. These are introductions, not reviews, just to let you know what’s coming out in the next year.

Here’s the description: Imagination takes on new meaning for a uniquely talented teen in this debut novel that is a breathtaking blend of contemporary, fantasy, and romance.

Sometimes Jonathan Aubrey wishes he could just disappear. And as luck—or fate—would have it, he can. Ever since coming out of a coma as a kid, he has been able to create alternate worlds. Worlds where he is a superhero, or a ladies’ man, or simply a better version of himself. That’s the world he’s been escaping to most since sophomore year, a world where he has everything he doesn’t have in real life: friends, a place of honor on the track team, passing grades, and most importantly, Kylie Simms as his girlfriend.

But when Jonathan confuses his worlds senior year and tries to kiss the real Kylie Simms, everything unravels. The real Kylie actually notices Jonathan…and begins obsessing over him. The fantasy version of Kylie struggles to love Jonathan as she was created to do, and the consequences are disastrous. As his worlds collide, Jonathan must confront the truth of his power and figure out where he actually belongs—before he loses both Kylies forever.

What I liked about it: In addition to being a blend of fantasy, contemporary, and romance, Jen’s debut novel is also a bit of a mystery–at least it was for me. As I read, I definitely got the feeling that something wasn’t quite right, that Jen was holding back on a significant plot point, but I couldn’t figure it out! Sure enough, something revealed late in the story adds a whole new layer to the narrative. I’m not a book spoiler, so I won’t go there. But it surely was one of those “Ohhhhhhh, wow!” moments. I also loved how she blended Jonathan’s fantasy worlds and real world down to the end. Again, not going to go into details. At the heart of the novel, is a broken, grieving boy who needs to heal after a tragic loss, which appealed to the contemporary YA lover in me. The mixing of genres here means there’s a little something for everyone.

About the author: Jen Brooks has a habit of being deeply moved by profound ideas, and her writing reflects her interest in exploring human goodness, relationships, and the feeling of being a part of something greater than oneself. She loves the science fiction and fantasy genres because of their dazzling possibilities for portraying characters and ideas. She credits her undergraduate experience at Dartmouth College, her MFA at Seton Hill University, and her fourteen years of English teaching with shaping her writing.  She is grateful to her family, friends, and students for inspiring her to write. You can find Jen on Twitter and Goodreads.