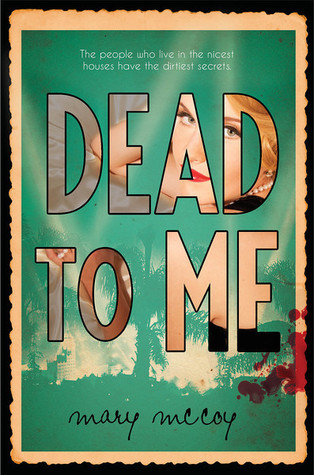 Note to pre-published writer friends: When you do get an agent and sell your book, be sure to join an online community for debut authors. I’m in the Fearless Fifteeners and the Class of 2k15. Not only are these groups a great source of support, but you will get to read Advanced Reader Copies! ARCs are the uncorrected proofs that are sent to reviewers, librarians, and book bloggers to promote the book. This starts at least six months before the final, corrected, hardcover is officially released. My fellow fifteeners and 2k15 classmates are starting to receive their ARCs and are sending them on ARC tours to the rest of us. We read, write notes in the book, and then send it to the next person. Very cool. I’ve decided to let you all know about the ARCs I’m reading, which is the least I can do to help my 2015 debut colleagues. These are introductions, not reviews, just to let you know what’s coming out in the next year. First up is Dead to Me by Mary McCoy (Marc 3, 2015/Disney-Hyperion).

Here’s the description: LA Confidential for the YA audience. This alluring noir YA mystery with a Golden Age Hollywood backdrop will keep you guessing until the last page.

“Don’t believe anything they say.”

Those were the last words that Annie spoke to Alice before turning her back on their family and vanishing without a trace. Alice spent four years waiting and wondering when the impossibly glamorous sister she idolized would return to her–and what their Hollywood-insider parents had done to drive her away.

When Annie does turn up, the blond, broken stranger lying in a coma has no answers for her. But Alice isn’t a kid anymore, and this time she won’t let anything stand between her and the truth, no matter how ugly. The search for those who beat Annie and left her for dead leads Alice into a treacherous world of tough-talking private eyes, psychopathic movie stars, and troubled starlets–and onto the trail of a young runaway who is the sole witness to an unspeakable crime. What this girl knows could shut down a criminal syndicate and put Annie’s attacker behind bars–if Alice can find her first. And she isn’t the only one looking.

Evoking classic film noir, debut novelist Mary McCoy brings the dangerous glamour of Hollywood’s Golden Age to life, where the most decadent parties can be the deadliest, and no drive into the sunset can erase the crimes of past.

What I liked about it: This isn’t a mystery about who the bad guy is. He’s openly bad. (Note: the *psychopathic* movie star in the description.) Mary keeps you guessing about the other characters’ actions and motives. People are not who they seem throughout the novel. Mary’s love for and knowledge of Los Angeles are also obvious, as the city and time period are brought to life in her descriptions.

About the author: Mary McCoy is a writer and librarian in Los Angeles. You can find more of Mary’s writing about Los Angeles’s notorious past at the 1947project and On Bunker Hill. She is also a contributor to Sleuths, Spies, & Alibis, and you can find her on Goodreads and Twitter.