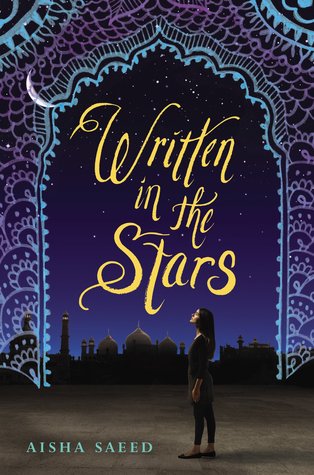 As a member of the Fearless Fiteeners, I was able to read an ARC of Aisha Saeed’s young adult novel, Written in the Stars (3/24/2015; Nancy Paulsen Books). ARCs (Advanced Reader Copies) are the uncorrected proofs that are sent to reviewers, librarians, and book bloggers to promote the book. My fellow fifteeners and 2k15 classmates are sending their ARCs on tour, which allows us a sneak peek at these upcoming new releases. I’ve decided to let you all know about the ARCs I’m reading to help support my 2015 debut colleagues.

Here’s the description: Naila’s conservative immigrant parents have always said the same thing: She may choose what to study, how to wear her hair, and what to be when she grows up—but they will choose her husband. Following their cultural tradition, they will plan an arranged marriage for her. And until then, dating—even friendship with a boy—is forbidden. When Naila breaks their rule by falling in love with Saif, her parents are livid. Convinced she has forgotten who she truly is, they travel to Pakistan to visit relatives and explore their roots. But Naila’s vacation turns into a nightmare when she learns that plans have changed—her parents have found her a husband and they want her to marry him, now! Despite her greatest efforts, Naila is aghast to find herself cut off from everything and everyone she once knew. Her only hope of escape is Saif . . . if he can find her before it’s too late.

What I liked about it: Books can act as mirrors, reflecting one’s self, or as windows, allowing us to look into another culture or world. Despite all my years as a student and teacher, my knowledge about certain parts of the world remains limited. Aisha Saeed’s novel gave me a window into Pakistani culture and the issue of arranged marriages in particular. Saeed, who is happily married through arrangement, shows us another possibility through Naila, a teen who has both Pakistani and American values. She respects her family and her culture, but she wants to make her own decisions when it comes to her future husband. Any reader with immigrant parents or grandparents could easily relate to being pulled between two cultures, trying to make room for both. But, when Naila’s family takes her to Pakistan, she slowly realizes this is will not be a temporary vacation. Naila’s new reality is brutal, heartbreaking, and representative of what some girls experience, as Saeed notes at the end of the novel. Naila’s story ends on a hopeful note. We can only hope for a similar outcome for real girls in the same situation.

About the author: Aisha Saeed is an author, mama, lawyer, teacher, and maker and drinker of chai. She is also the Vice President of Strategy for We Need Diverse Books™. Aisha has been blogging for over a decade and her writing has also appeared in places such as The Orlando Sentinel, BlogHer, Muslim Girl Magazine, and Red Tricycle.She is also a contributing author to the New York Times acclaimed anthology Love Inshallah. Her debut YA novel WRITTEN IN THE STARS will be released in 2015 by Penguin/Nancy Paulsen Books. She is represented by Taylor Martindale at Full Circle Literary Agency. You can connect with Aisha at her website, or follow along on Facebook, Twitter, Instagram, Pinterest, orTumblr. You can also reach her by e-mail at aishacs@gmail.com